At the end of a two-year pursuit of a second successive European Championship appearance there was only heartache for Northern Ireland. Ian Baraclough’s spirited side took Slovakia to extra time courtesy of an 87th-minute equaliser at Windsor Park but were ultimately beaten by Michal Duris’s 110th minute goal.

When Paddy McNair forced Milan Skriniar to put through his own net with three minutes of normal time remaining the pendulum appeared to swing in Northern Ireland’s favour in the play-off final. They had trailed to Juraj Kucka’s first-half goal for so long but never accepted defeat. The introduction of Kyle Lafferty, playing one week after the death of his 41-year-old sister, transformed the hosts’ attacking edge and brought fresh impetus to the team in green. But it was not to be.

Slovakia capitalised on two defensive lapses and it was enough to add Northern Ireland to the Republic of Ireland on their list of Euro conquests. When Kucka’s pass struck Jonny Evans on the back of the leg with 10 minutes remaining the ball fell to the substitute Duris who stepped to his right and beat Bailey Peacock-Farrell at his near post far too easily. Slovakia’s opener also came from a defensive lapse by Northern Ireland who pressed, harried and hauled their way back into contention as players dropped through injury during extra time.

There was an enforced change to the Northern Ireland team that overcame Bosnia-Herzegovina in the semi-finals after Corry Evans suffered a hamstring injury on Saturday. Baraclough reacted positively, replacing the Blackburn midfielder with the Charlton forward Conor Washington in a bid to increase the threat of a team that had scored only four goals in their last seven games. His players responded in kind by taking the game to Slovakia from the first whistle.

Sluggish starts have been a feature of the new Northern Ireland manager’s tenure so far but he witnessed a vibrant opening in this match. McNair and Jamal Lewis were prominent as the away side were initially pinned back by a series of crosses into their penalty area but, once again, Northern Ireland lacked the presence and numbers in attack to turn pressure into opportunity. The Fulham goalkeeper Marek Rodak was called into action in the first half only when a deep cross from Niall McGinn almost dipped under his crossbar and demanded action. 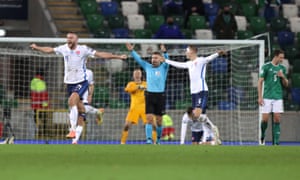 Slovakia absorbed the early pressure and gradually their more intelligent attacking ideas gave them the edge. There may have been only 1,060 home fans allowed inside the stadium following talks between the Irish FA and the Northern Ireland executive – and they had to pass through a “disinfecting pod” on entry – but they made a healthy noise. However, it was the visitors, with Marek Hamsik controlling midfield and spraying dangerous passes behind Baraclough’s full-backs, and false No 9 Ondrej Duda drawing the centre-halves out of position, who thrived in the unusual setting.

Peter Pekarik, the Slovakia right-back, served warning of the visitors’ intent by twice latching on to long balls behind Lewis. His second run ended with Albert Rusnak firing just over Peacock-Farrell’s crossbar from Pekarik’s pull-back. But the breakthrough was a calamity from Northern Ireland’s perspective.

There appeared to be little danger when Jonny Evans stepped out of defence in an attempt to clear a crossfield ball towards the centre circle, but there was a complete lack of communication between the Leicester defender and George Saville. The Middlesbrough midfielder reached the ball first and, unaware of Evans’ position, sent a header back to where the defender would ordinarily have been. It went straight to Kucka instead, and he raced through to beat Peacock-Farrell with a clinical and calm finish inside the keeper’s right hand post.

The task confronting Baraclough’s side looked even more complicated when the influential Stuart Dallas, winning his 50th cap, injured his arm in a collision with Tomas Hubocan. Dallas required lengthy treatment on the sidelines but elected to play on, cradling his right arm with his left as he did so.

Northern Ireland ended the first half strongly. McGinn fired over from the edge of the area after seizing on a loose pass from Stanislav Lobotka, but that half chance from an opposition mistake was the home team’s brightest moment before the interval. Their pressing, intensity and creativity had to improve for Euro 2020 to remain in sight and the second half brought the necessary recovery. Washington drew the first genuine save from Rodak when McGinn stole possession and broke towards the Slovakian box. The winger’s final ball was behind Washington but he managed to dig out a shot that went straight at the goalkeeper.

Northern Ireland continued to exert pressure on the Slovakia defence. Rodak dealt impressively with a number of crosses aimed into the heart of his area. Duda was booked for leaping into Evans with no intent of even challenging for the ball. Had the striker’s arm been raised any higher he could easily have seen red.

Baraclough rang the changes in a desperate search for an equaliser. One of his substitutes included Kyle Lafferty, the hero of the Euro 2016 qualifying campaign who had declared himself available one week after the death of his 41-year-old sister, Sonia. Lafferty almost rolled back the years when he was inches away from connecting with a Lewis cross and also when releasing Dallas into the area with a delightful flick. The late bombardment eventually paid off with only three minutes remaining when McNair burst past two tired Slovakian challenges on the right, reached the byline and aimed a low cross towards Liam Boyce at the near post. The otherwise excellent Skriniar threw himself in front of the substitute to intercept but only succeeded in steering the ball into his own net. Windsor Park erupted and Lafferty was so close to conjuring a stunning victory in the 90th minute but his low drive from 20 yards struck a post with Rodak well beaten.