Azeem Rafiq has said Asian cricketers at Yorkshire are subjected to “differential treatment” and a culture of discriminatory comments as part of the evidence he has submitted to the club’s investigation into alleged racism.

The former off-spinner, 29, was due to speak to the panel on Friday but, in advance, issued a statement in which he alleges being the victim of bullying during his nine seasons at Headingley. He also claims slurs such as “Pakis” and “elephant washers” were aimed at himself and other Asian cricketers.

Rafiq, who was released by the club in 2018 months after he and his wife lost their first child, prompted Yorkshire to launch an investigation in September following media interviews in which he described “feeling suicidal” as a result of his experiences.

He has since expressed “serious concerns” about the process – including the absence of witness anonymity that he claims deters others from speaking out – and has now decided to share his evidence publicly while it is still going on.

A press release issued by his lawyers, Chadwick Lawrence LLP, on Friday alleged “differential treatment” of Rafiq and Asian teammates, including “in disciplinary matters, in coaching and development support, and in pastoral care (in particular after Rafiq’s son was stillborn).”

It went on to claim that there was a prevalence of racist “banter” in the Yorkshire dressing room, a drinking culture that excluded from those Asian backgrounds and racist incidents involving supporters that, he says, the club failed to properly investigate.

Rafiq says his first experience of racism in cricket came as a 15-year-old at Barnsley Cricket Club when, following victory in the league, he alleges he was “pinned down” by teammates and “forced to drink wine” despite being a practising Muslim.

The former England Under-19s captain goes on to state that after joining the Yorkshire setup he was “ridiculed” for not drinking and excluded socially, before eventually giving in to peer pressure and conforming in order to “feel accepted”.

Beyond this, Rafiq alleges that in his two spells at Yorkshire – from 2008 to 2014 and 2016 to 2018 – he and other Asian players were subjected to “constant abuse” and referred to as “you lot”. The phrase “go back to where you came from” also appears in his statement, as well as comments and jokes about his Pakistani heritage.

While Rafiq praises the support of Jason Gillespie (the head coach from 2011 to 2016), he also estimates experiencing only 60 days during his own two spells where he “enjoyed playing cricket” and did not have to “endure abuse”. 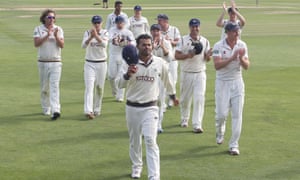 Rafiq continues: “[The remainder] has been filled with many dark moments where I have been left isolated, lonely, bullied and targeted because of my race. If my race had not played a part in this treatment, I would have witnessed other British white players treated in the same manner.”

Rafiq claims he took these issues to the club but did not tell others – including his own family members – until moved to go public in the wake of George Floyd’s killing in America in May and the rise of the global Black Lives Matter sentiment.

“I have spoken out about the racism I faced because I don’t want kids to go through what I did,” Rafiq said in Friday’s press release.

“I want to see kids starting off their journey in cricket in a culture of acceptance and respect, where they are judged on their talent and not on their culture and identity. I hope that the investigation will result in meaningful change at the club and in the sport.”

As well as a lack of witness anonymity, Rafiq and his legal team have expressed concerns about the club’s handling of his allegations and also the initial composition of the panel chaired by the prominent surgeon Dr Samir Pathak.

Hanif Malik, the club’s head of diversity, and Gulfraz Riaz, chair of the National Asian Cricket Council, have since stood down from the process and will act as witnesses, with Rafiq claiming that neither sufficiently escalated his complaints in the past.

In a statement issued on Friday in response to Rafiq going public with his evidence, Yorkshire said: “We have taken the claims made by our former player, Azeem Rafiq, very seriously and a full investigation conducted by Squire Patton Boggs, an independent law firm, began in September.

“We realise that this is a difficult time for all parties involved but it is important that these matters are investigated thoroughly and swiftly.

“In addition, and recognising that this process is as much about the future as it is the past, we have convened an independent panel to support the investigation and to publish recommendations on steps the club may need to take as a result of the investigation’s findings.

“Racism has no place in our society or in cricket and we are hopeful that the outcome of this investigation and the recommendations of the panel will drive positive progress which can be shared by all.”

The club has said previously it expects the investigation to be concluded before the end of the year. Rafiq meanwhile has launched a Crowd Justice funding page to help cover his legal costs.

In the UK the Samaritans can be contacted on 116 123 In the US, the National Suicide Prevention Lifeline is 1-800-273-8255. In Australia, the crisis support service Lifeline is 13 11 14. Other international suicide helplines can be found at www.befrienders.org.